This summer I embarked on three Midwestern water adventures and thought you might find them interesting.

Local Sierra Club chapters conduct clean-water campaigns that would welcome the advice and support of local water-treatment professionals. Why not contact www.sierraclub.org for a list of water cleanup events in your area? Participating dealers benefit from the community goodwill and associated positive publicity.

In an interesting presentation on freshwater mussels of the upper Mississippi River, we learned how these native crustaceans help filter river water to help keep it clean. But the most inspiring presentation was The Story of Living Lands and Waters (LL and W), based in East Moline, IL. Since its founding in 1997 by a western Illinois native, LL and W has grown to become the only industrial-strength river cleanup organization in the world.

Meghan Elgan, Education and Projects Coordinator, spends at least nine months a year living and traveling on a barge that patrols the Mississippi River and, most recently, the Ohio River. Her crew and others host river cleanups, watershed conservation initiatives, workshops and other conservation efforts. LL and W claims to have removed over 10,399,605 pounds of trash from the banks of major rivers, involving nearly 115,000 volunteers. While primarily funded by government and private foundation grants, LL and W receives grassroots support from thousands of individual donors. 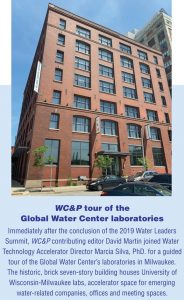 2019 Water Leaders Summit, June 26-27
On scenic Lake Michigan, Milwaukee, WI, 90 miles north of Chicago, has truly become a world water capital. Water wisdom was on full display for two days at the Water Leaders Summit, which was held in an expansive, tented facility next to the Harley-Davidson Museum—itself, an impressive testament to testosterone.
Hosted by The Water Council, the Leaders Summit is the preeminent North American water industry annual event for water professionals, water technology organizations and water-intensive industries. Wisconsin is, of course, home to such water technology leaders as A.O. Smith Inc., which in 2016 entered water treatment with its acquisition of Aquasana, followed by purchases of Hague Quality Water in 2017 and Water-Right Inc. in 2019. They hosted a pre-summit tour of their new headquarters facility on June 26.

The theme of the summit, Rethinking Water, was set by opening remarks from Charles Fishman, former newspaper reporter/editor and since 1996, a contributor to the magazine, Fast Company. “Water is the engine of the worlds’s economy,” said Fishman. “And water is invisible—that’s its biggest problem!” Fishman’s 2011 best-selling book, The Big Thirst: the secret life and turbulent future of water, has changed how people think about water and how they manage it. Over the two-day summit, Fishman was to moderate conversations on corporate water stewardship, understanding water risk and how Nestlé and P&G have invested heavily in industrial process water conservation and recycling.

Emilio Tunuta, VP Sustainability at Ecolab, told how client Nestlé invested $23 million in an industrial RO system that saved the company’s Carnation Evaporated Milk unit $144 million on its water bill in Modesto, CA. According to Courtney Archibald, Nestlé’s Health & Environmental Manager, its Carnation unit requires a half-million gallons (1.8 billion liters) of water per day, making it the single largest user of Modesto’s water supply. “Nestlé is now a water-smart industrial company,” explained Tunata, “where once they wasted water, they today recycle in their plant operations.”

Eleanor Allen, CEO, Water For People, comes from a background of big water engineering and the Peace Corp. For years, she has she lived in Central and South America as a civil engineer, before joining the internationally respected non-governmental organization, which finds her partnering with nine Latin American countries providing life-saving drinking water systems for people with few resources. Allen told the Water Summit audience about the many twists and turns in her water career and about her recent adventure as a relay bicyclist in the coast-to-coast Race Across America. Will Sarni, CEO, The Water Foundry, described “what’s next beyond the energy/water/food nexus.” He described digital water as bringing on “the fourth industrial revolution.”

Bill Malarkey, Armane Advisor’s managing partner, shed light on corporate water risks with a story on Kraft having moved production of string cheese to its Louisville, NY, plant without first assessing the community’s ability to provide adequate process water. It was a risk Kraft regretted when available water ran short. The summit concluded with the stories of six BREW accelerator start-up companies that won grants to continue their development with Water Council support through the Global Water Center.

MWRD +Chicago River Boat Tour, July 26
Our tour of the Chicago River began at the mouth of Lake Michigan, where we boarded a Metropolitan Water Reclamation District (MWRD) of Greater Chicago working boat with both front and rear viewing decks. Looking from right to left, we could plainly see that the Chicago River’s water level is lower than Lake Michigan.

The City’s sewers originally discharged human and industrial wastes directly into the Chicago River, which in turn flowed into Lake Michigan. The MWRD was founded in 1869 to protect Chicago’s water supply. Its first action was to design and build Chicago’s unique canal system which reversed the flow of the river, improved trade traffic routes from the East Coast to the Mississippi River basin and provided protection for the city’s drinking water. This engineering wonder has saved many thousands of lives.

Following along the river path of our tour, we could imagine the famous Deep Tunnel, 300 feet (91 meters) below, a giant 109-mile (175-kilometer) pipe and reservoir system that carries and stores Chicago’s combined sewer flow that once flooded thousands of basements and hundreds of streets. Upstream we saw lingering evidence of air-polluting industry, soon to give way to planned renewal projects on both river banks. Gliding by Chicago’s spectacular River Walk, we gazed at the new glass towers and architectural gems like the Wrigley Building as we headed toward the famous Michigan Avenue Bridge.

About the author
David H. Martin earned his BA Degree in English/psychology from the University of Dayton (Ohio) in 1965. He worked as a copywriter, creative director and advertising account supervisor at three national ad agencies from 1965-1978. Some of the major accounts Martin served include Frigidaire, Whirlpool, GE Appliances, the Hoover Company and Johnson Controls. He was a partner in two regional advertising agencies in Chicago from 1978-84; Owner of Martin Marketing from 1985-1987; Director of Marketing for Hurd Windows Inc. from 1987-1990 and has been President of Lenzi Martin Marketing since 1990. As WC&P Contributing Editor, he has served as a WQA Member and observer on the WQA Marketing Communications Committee since 2016. Martin received the 2019 WQA Award of Merit. He can be reached at (708) 848-8404 or by email at dmartin@lenzimartin.com